a game by Andrew Backhouse

Pencilvillage is a solo print-and-play strategy game. You manage resources, protect and grow a village, and delve into dungeons in search of treasure.

Pencilvillage has enough crunch to be satisfying, but it's light. Each game lasts an hour or less, and it's easy to pause. I set out to make the most interesting puzzle possible for the fewest rules and the simplest possible systems.

Broadly speaking, you spend the first half of the game building out your town in the overworld while you spin up your economy, and the second half of the game sprinting to fulfil your objective while questing as greedily as possible in the game's varied dungeons. Throughout, your town will need an increasingly stern military to survive the attacks against it.

Every action has been meticulously streamlined to reduce the fiddliness factor. Resource structures produce in fixed amounts, discount mechanics are scarce, gain and loss is as simple as rotating a die or moving tokens, there's very little erasing, and thoughtfully designed trackers make the systems clear at a glance.

The depth has not suffered as a result of this streamlining. Every round, you will weigh up competing priorities, trade off long-term direction and short-term necessity, and make meaningful decisions with substantial consequences.

What do you need to play?

You need a pencil, an eraser, two printed playsheets, and twelve six-sided dice. You can optionally use fewer dice, and track resources with coins, tokens or in pencil. 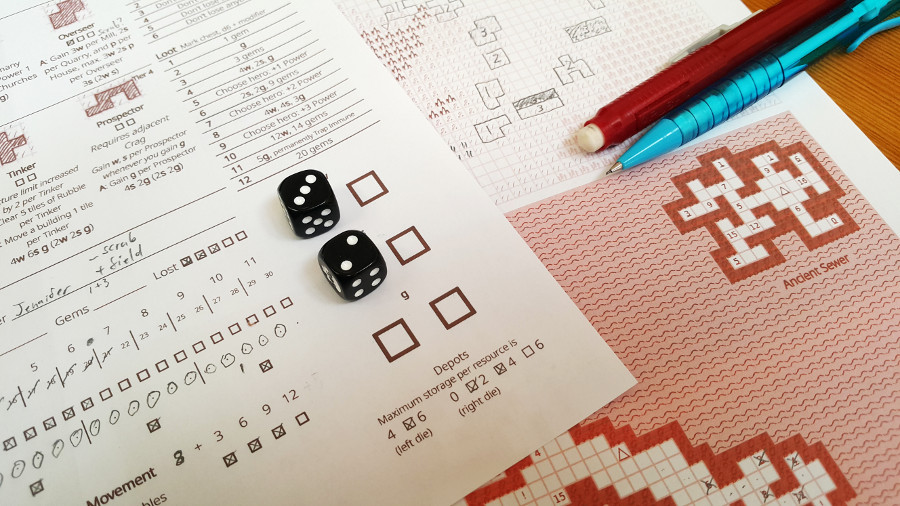 Is this game for me?

Complexity-wise, this is designed to appeal to everyone. No, really! With a simple character and no mods, the game is an occasionally tricky but broadly relaxed experience, with which casual players will be able to find a good amount of success. If you crave the crunch, simply pick a more advanced character and sprinkle with mods until you find a complexity level which is comfortable for you. The game is really flexible in this regard.

The game is designed for solo play. Think of it like a good book—it's a pleasant way to spend quality time with yourself. Skip it if solo isn't your main intended mode of play. You could probably play in a small group, making joint decisions or taking alternate rounds, but solo is where it shines.

It's a strategy game with push-your-luck elements. The story and immersion layer is thin. Don't buy this if you're expecting a grand tale told in flowing text. It's more of a meditative, tricky puzzle-box, with near-endless variation due to the setup system. The sense of engine-building is really satisfying, along with growing the village which drives that engine.

It relies on chance to add variation into the gameplay and provide some ebb and flow. It is not designed for masochists—you can expect to win most of the time once you know what's going on, before you add mods—but chance can mess you around dramatically. If that infuriates you, this may be a miss.

The font is pretty small. The pics and videos should give you some impression of the scale. It's not tiny, but if you have trouble with seeing small things close-up, it might be a consideration.

While I set out to make a coffee-break game, Pencilvillage ended up around the 1-hour-per-game mark. I'm really happy with how light it makes its crunch, but one hour may still be too much of an investment for you. If you want a game which you can reliably be done with in 15 minutes, this isn't it. It is, of course, easy to pause.

It's not exactly a visual feast. The structures you build are simple shapes drawn on a grid, dungeon-delving involves rolling dice and crossing out numbers, and the rest of the systems are tickboxes. If the elegant-systemic, village-sprawling, engine-revving payload isn't your thing, you might want to look elsewhere.

A big part of the appeal (to me, at least) is that it's a big machine in a tiny package. If you want an ultra-portable game, there are games out there that offer smaller footprints. If you want a giant machine, there are games out there which are much more intricate. The particular phenomenon of a really satisfying, puzzley, village-building, dungeon-delving experience, with an astonishingly wide decision space for its weight, detailed in a single page of rules, completed in a tidy hour, and simulated on a mere two sheets of paper, is singularly Pencilvillage.

This is definitely a dynamite, small package situation. A vast quantity of development and playtesting time has gone into getting things tuned juuust right, and it has incredible replay value. Check out the videos if you want a better idea of what the gameplay is like!

Pencilvillage was preceded by a sibling game, Penciltown. If you're looking for a deeper dive or a more narrative experience, it might suit you better. 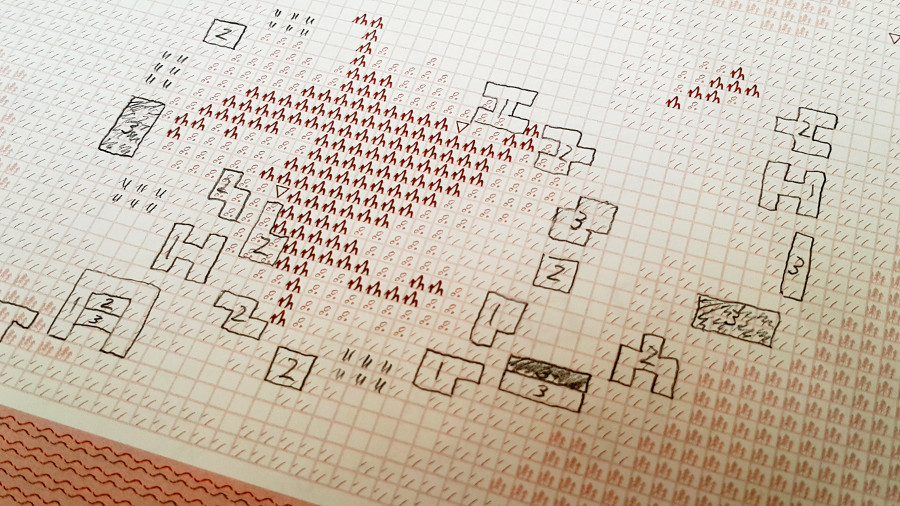 Any other cool stuff? 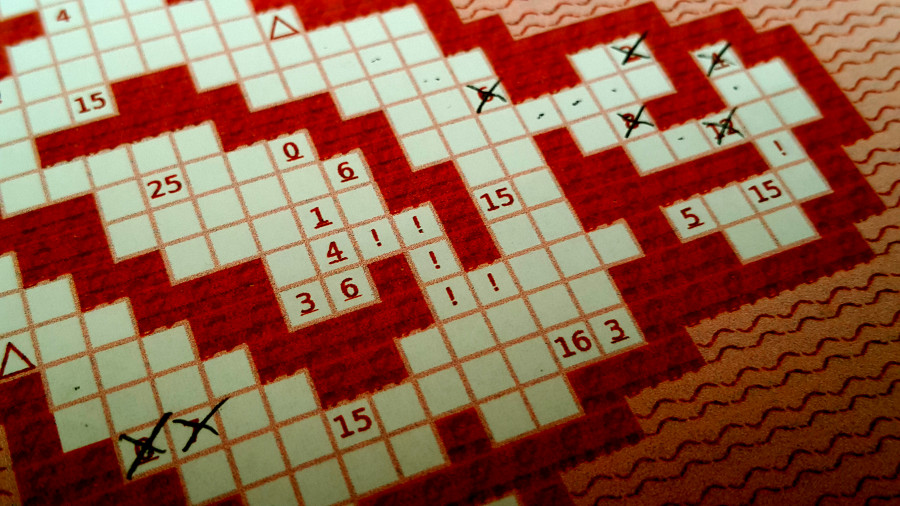 What does it cost?

What do I get?

Pencilvillage, in all its ultra-compact 8-page PDF glory. It comprises:

If you do not see the payment embed above, you may need to disable script blockers. It may take up to two minutes to receive your files. If you are a Gmail user, please check your spam folder! Several game e-mails have ended up in there. To download your files, click the "View product" link (button) in the e-mail you receive. Mail pt@andrewbackhouse.com if you have any problems.

You may prefer to shop directly on Gumroad's site.

Penciltown is also available on 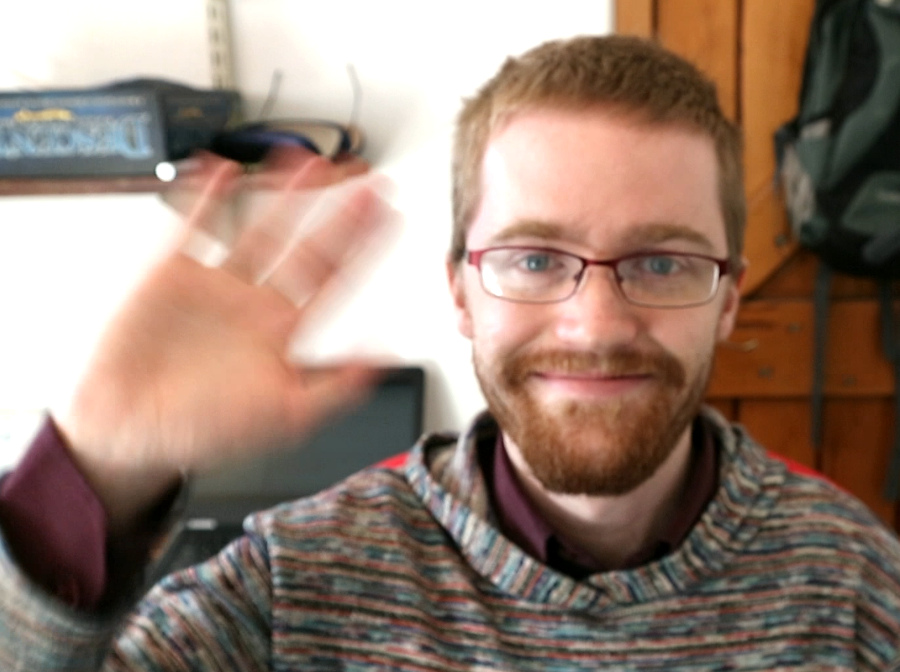 Thanks a bunch for your interest, and I hope you buy Pencilvillage, because it's really cool.

I want to hear from you! E-mail me at pt@andrewbackhouse.com.

I'm running Google Analytics on this page to examine traffic. If this offends you, I'm really sorry—please feel free to block Javascript. Pencilvillage was made almost exclusively using free and open source tools. Huge thanks to the LibreOffice developers! Site fonts are Noto Sans by Google and Annie Use Your Telescope by Kimberly Geswein. Calligraphr.com used in document development.